The weekend after my marathon trip south in the mountains through Taiz and back up the Tihama coastline, the school had planned a trip to Manakha. It didn’t occur to me at the time, but Manakha was the city perched on the edge of the mountainous escarpment that separates highland from the coast near which we drove at the end of this trip.

I had heard the city mentioned a number of times, mostly because it is a prominent waypoint on the Chinese-built road between Sana’a and Houdaidah. We met early on Thursday morning for the hour and a half ride. Nearly all of the students turned up for the trip, which made us quite a large group. Over the previous month we had gained an American, a German, two Oklahomans, three Italians, an Australian, and a Canadian. The school was starting to feel wonderfully full and I enjoyed the diverse group of experience and personalities we were beginning to house.

The previous weekend Mubarak had stepped down and protests in Sana’a were starting to pick up again. As we drove up into the mountains above the capital plateau, one student looked back over the city lamenting that we would be away from the action on what could be an exciting day. “This could be the day that the revolution happens and we’ll miss it!” he joked.

At that time, the protests were still free of the government violence that trickled, and then flooded in, between the end of February and the end of March. That Sana’a could fall during our day trip was clearly a jest. The excitement no one wanted to miss was that of a people celebrating en masse an autocrat’s decision to step down or hand over power, not the sniping, spraying of sewage through water cannons, and shelling of residential areas that actually later came to pass.

After a pit stop somewhere in the brown gravely mountains south and west of the capital, we pulled off at our first stop: the school president’s mountainside real estate. I heard that he hoped to one day build a retreat center there. You had to admire his vision, even if you knew such a long-term investment would be unlikely for the foreseeable future. However, the school’s enrollment prior to AQAP’s international reemergence in 2009 was remarkable: at one point the school had to house students in a nearby hotel because the two dorm buildings and guest house were overflowing. I’m sure a retreat center near Manakha seemed a more reasonable use of resources in such prosperous times.

On the president’s hillside was a small house, and there lived a man who tended to the grounds and its fruit trees. He showed us where heavy rains had washed out some of the terracing and pointed out the farm’s cistern. The view was spectacular. A ribbon of black asphalt snaked along the hillside below. Beyond that were royal blue sky and a fall into another of ’s unfathomable plunges in elevation. To the right was the city of , sprawled awkwardly along a ridgeline.

From the van parked on the roadside below a number of us carried up bags of roti scraps, food for the farmer’s goat. After hiking around the hillside for a while admiring the flora and the view, we hiked back down to the road and started up the hill before arriving at another lookout point. Shortly after, we piled back in the van and continued on. 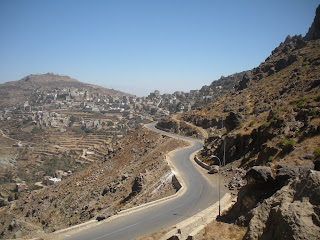 The winding road leading back to Manakha 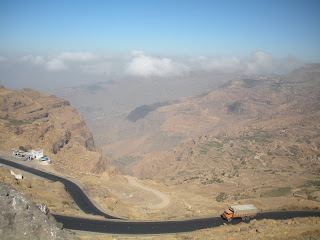 The ribbon of road leading through the mountains surrounding Manakha 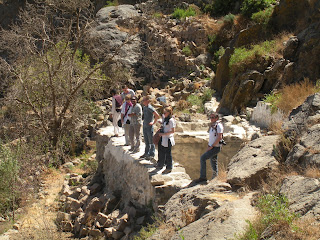 Students admiring the view, standing on the farm's cistern 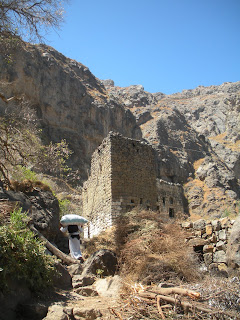 The hillside's hired guard and farmer 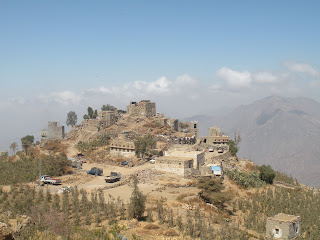 A group of houses down the road from the mountainside
The next stop was Hajjarah. The van stopped in the more modern part of town, behind which lay a peak shrouded in cloud, presenting the image of an active volcano. We made our way toward the older quarter along a shallow set of stairs just as noon prayers were finishing. Old Hajjarah sat packed onto a rocky peninsula overlooking a wide, shallow, terraced valley. Dead ahead and to the left one could see green just starting to sprout in the valley, and through it rolled a vaporous river of clouds. On the other side of the old section plunged an even deeper valley, on the opposite ridge of which was Manakha. 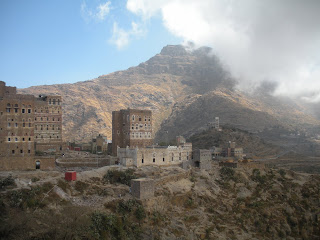 A mountain looming over Hajjarah 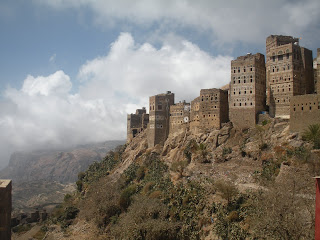 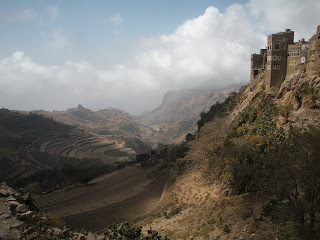 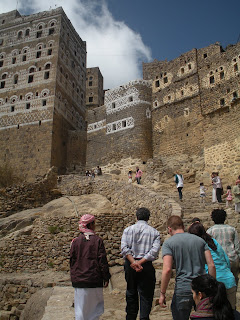 Up the stairs to old Hajjarah

A young boy, I now forget his name so many months later, led me through alleys and up and down stairs in the old town. The buildings stretched into the sky, large stone stacked on stone. The boy showed me where Jews had once lived, pointing out a wooden mantel above one house on which was etched a coffee bean and a star of David. He then took me to another of the town’s highlights: a tower house hanging precariously over an edge, propped up by a curving stack of stones.

After the short tour I rendezvoused with the rest of the group and we stood around the vans chatting at various levels of Arabic with a number of the local kids before moving on once again. 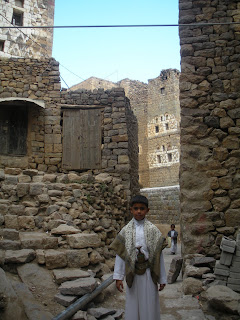 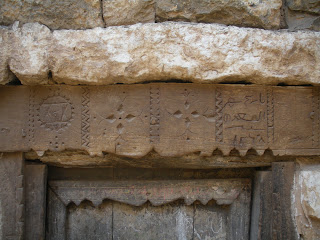 Signs of those who came before 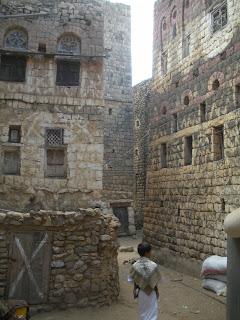 Being led through old Hajjarah

Our next stop was what seemed to be a relatively popular tourist hotel back in the city of itself. There we enjoyed a large lunch spread out before us feast-style on a long plastic sheet. We reclined on either side on low cushions. The real treat came after we ate. Our hosts brought out drums and an oud and began to play. After some frenetic snare-type drumming, two men entered the room and for the next half hour or so entertained us with Yemeni dance. They first danced alongside each other, spinning, rocking and stepping. They then brought out their jambiyyahs, which they skillfully twirled into the routine. Lastly they incorporated antique muskets. 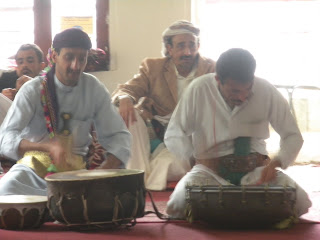 Our hosts in Manakha entertain us with music 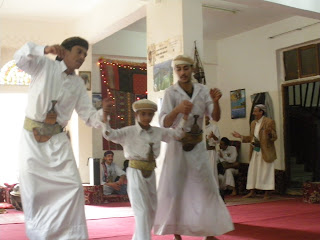 We had one more destination after finishing lunch: Hutayb. Ismaili pilgrims come from as far away as India and Singapore to visit this hamlet south of Manakha and pay their respects at the shining white mausoleum of Hatim al-Hamdi, a missionary prominent in a particular branch of the Ismaili denomination of Islam. They also come to visit the mosque he is said to have built, set on a cliff high above the mausoleum and standing sentinel over inspiring views of the . 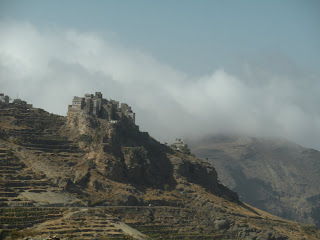 On the road to Hutayb 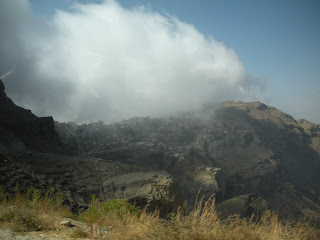 On the road to Hutayb; cloud shrouds the city of Manakha 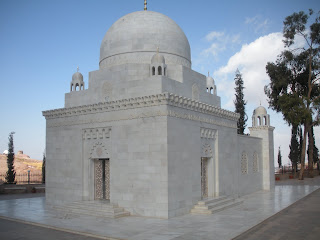 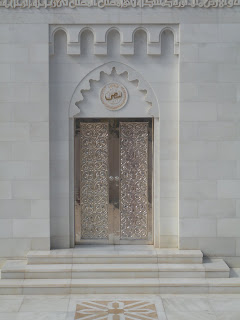 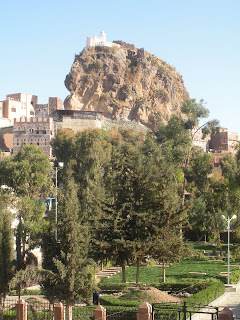 Pinnacle on which Hatem's mosque is located

When we arrived we were at first not allowed to ascend to the mosque, the keeper of the key to the path’s gate having gone missing. In the meantime I bought some genuine Yemeni coffee from a nearby vendor, which I later went on to enjoy as I learned how to brew Turkish coffee in our kitchen. It was wonderful.

Of course the key-keeper was eventually found and we ascended the rocky promontory on which the mosque was built. Yet again, the views were mind-boggling (you’ve probably begun to see a theme here). The same seemed to apply here as elsewhere in Yemen, but on a grander scale: deep valleys, terraced the whole way down like a real life topographical map, falling away from improbably inaccessible villages built like castles along high points in the surrounding ridge lines. We snapped pictures and admired the view before heading back down to turn back towards Sana’a.

And so concluded our trip to Manakha and the nearby villages of Hajjarah and Hutayb. By the time I got back in the van I was exhausted and napped most of the way home. 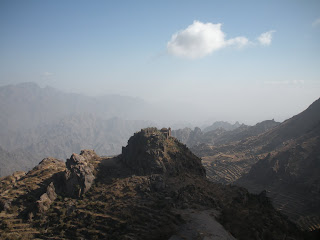 View from the mosque 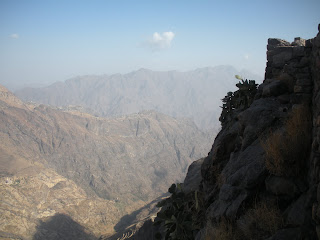 Another view from the mosque; you can see the shadow of the pinnacle on the bottom left
Posted by p j l at 7:50 AM

Counterterrorism in Yemen After Saleh (policymic.com)

What Happened in Yemen? How One General Changed the Game (policymic.com)

Roadblocks to Revolution: Why Yemen Might Not be Next to Fall (policymic.com)

p j l
Sana'a, Yemen
**Update: No longer in Yemen. Still keeping up with what's going on though! I'll be updating periodically.** Not changing the world, not ending poverty, I'm slaving away at my first real desk job in exchange for free Arabic lessons. After majoring in Middle Eastern History and minoring in Arabic, I realized the US job market has no room for thinkers and writers in this economy and moved to where my skills were most needed: Yemen. I'll be living here for a year, improving my Arabic and learning the ropes of business administration in one of the toughest industries in the world: convincing Westerners to come to Yemen to study Arabic.

Sana'a - the capital of Yemen

wadi - Arabic for valley, sometimes used specifically to refer to a dry riverbed

qishr - a popular Yemeni coffee drink made by steeping the husks of the coffee plant in hot water. The result is much like tea in terms of translucency and strength of flavor.

shawarma - much like the kabob stands found in Europe, shwarama is roasted beef shaved from an upright rotisserie. Often made into a sandwich when served by street vendors.